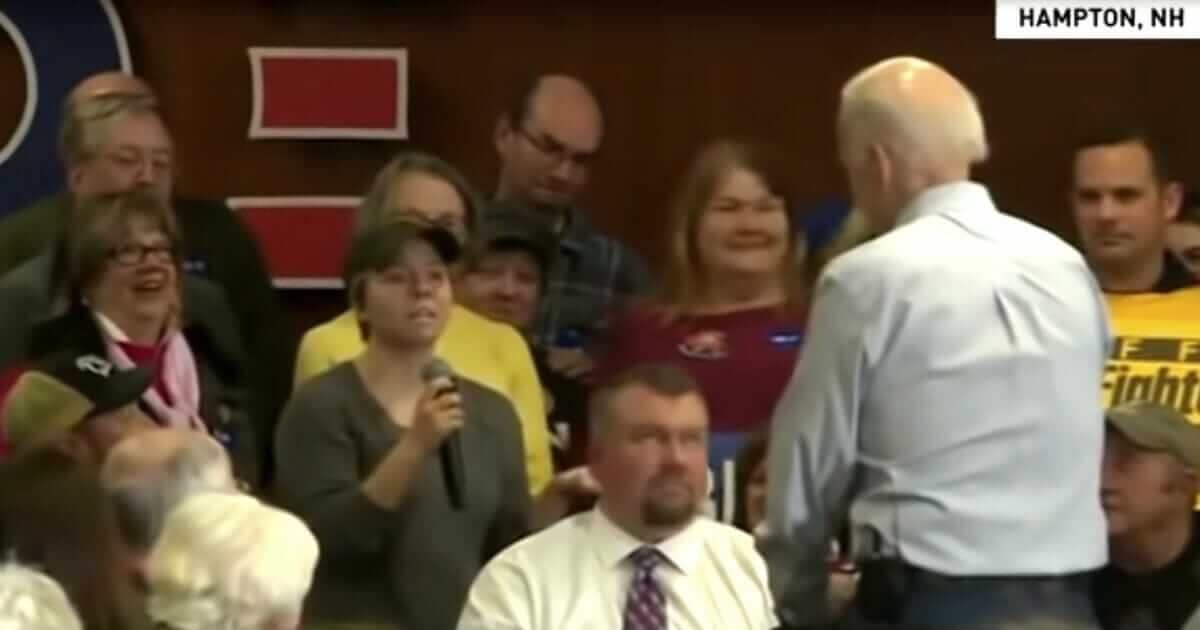 A Georgia college student said Democratic presidential candidate Joe Biden’s comment to her after she asked him how his poor finish in the Iowa caucus would impact him in the presidential race was “kind of humiliating.”

On Sunday during a campaign stop in New Hampshire, the former vice president appeared to lose his cool after Madison Moore, who is studying economics at Mercer University in Macon, asked him about his struggling campaign.

“How do you explain the performance in Iowa, and why should voters believe that you can win the national election?” the 21-year-old Moore asked.

Biden responded by asking her if she had ever attended a caucus before.

When Moore responded that she had, Biden launched a bizarre accusation.

Biden spokeswoman Remi Yamamoto said the line was a “joke” and that it came from a John Wayne movie.

Like Olivia notes, it’s a joke that was met with…. drumroll… laughter in the room and from the questioner. It’s from a John Wayne movie and he’s made it plenty of times before. Sorry to ruin the fun twitter! https://t.co/XIbn8wF53W https://t.co/5D0Kk06RGK

Slate sought to track that down and found no use of that exact line. The closest it could come up with was from “Pony Soldier,” a 1952 film starring not Wayne but Tyrone Power, in which an Indian chief says, “The pony soldier speaks with a tongue of the snake that rattles.”

Symone Sanders, a senior Biden campaign adviser, also tried to dismiss the remark during an appearance on MSNBC.

“It was a joke,” she said. “Many people in the room laughed.”

The woman who Biden called a “Lying Dog Faced Pony Soldier” told the Washington Post she was offended.

Biden Campaign Senior Advisor Symone Sanders says “It was a joke, many people in the room laughed”

Moore told The Macon Telegraph that it was “kind of insulting” to see the comment shrugged off as a joke.

“It was kind of humiliating to be called a liar on national TV by the former vice president,” she told the newspaper. “Instead of answering that question straightforward, his immediate response was to attempt to invalidate me by exposing my inexperience.”

Moore said Biden “has been performing extremely poorly in this race, and the fact that he couldn’t just straight answer my question without bullying or intimidating just exacerbates that fact. I am a 21-year old college student, like what the hell do I know? Who cares who I am or my experience. Just answer the damn question.”

She went on to say that she didn’t realize her question was going to go viral and lead to national recognition.

“If I had expected that, I would’ve worn makeup,” she said. “I would’ve looked a lot cuter.”

Chris Grant, a political science professor at Mercer who organized the trip to the campaign stop, told The Telegraph in a Facebook message that his goal was to give his students more experience in a political setting and be directly involved.

“Madison asked a completely reasonable question [to] a very experienced politician and unfortunately got an answer that was not in that candidate’s best interest,” Grant said. “I think it’s an amazing learning experience for our students to be able to see this up close.”

He said Moore “certainly has a reason to be upset with the vice president.”

President Donald Trump’s eldest son went to Twitter to weigh in on the incident.

“If he [Biden] can’t handle a simple question from one of his own supporters, how can Joe Biden possibly take on Donald Trump one on one for six months?” Donald Trump Jr. said.

If he can’t handle a simple question from one of his own supporters, how can Joe Biden possibly take on Donald Trump one on one for six months?
🤔🤣🤡 #NewHampshirePrimary https://t.co/t0KVEc9uoZ

Biden has been having a rough month. Aside from the incident with Moore, he also admitted to taking “a gut punch” in Iowa and apparently threw in the towel in New Hampshire altogether on the way to finishing fifth there.