She wants to change our flag and our nation – in a big way!

The Squad—AOC, Omar, and the rest—have a major problem with America.

They go after Donald Trump—and even our Constitutional rights!

But this new idea might get the prize for the most deluded one yet:

They want to change the number of states in the country!

And one key member of The Squad actually wants to hang an “altered” version of the American flag outside her office, to show her support for the idea.

Rashida Tlaib (D-Mich.) wants to turn the District of Columbia (D.C.) into a full-fledged state:

Michigan Democratic Rep. Rashida Tlaib said Thursday she wants to display an altered American flag with 51 – instead of 50 – stars outside her congressional office to demonstrate support for making the District of Columbia a state.

Yep, looks like Tlaib wants to ditch Old Glory and make a new one that she approves of. How egotistical is that?

Then she made the mistake of putting this proposal on Twitter. 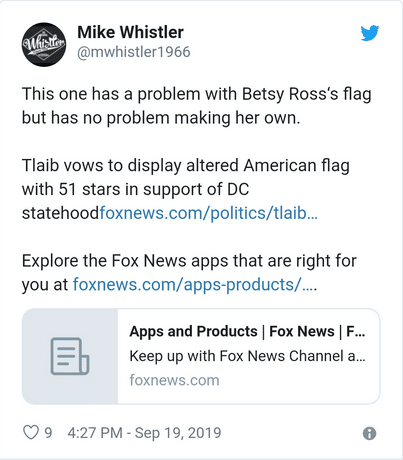 “This one has a problem with Betsy Ross’s flag but has no problem making her own.” 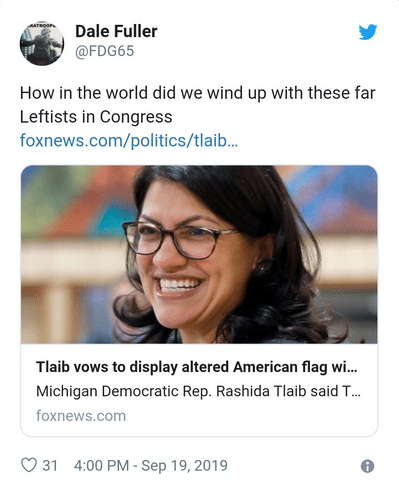 Well, we know why Tlaib wants that 51st star.

Look, there are LOTS of Democrats in D.C. Most of its 700,000 residents are likely to vote Blue in any election.

Furthermore, they would get representation in the Senate as a new state … and those Senators are guaranteed to be a Democrat.

So, this is just another ulterior motive for Tlaib: she only wants Democrats to get an edge in the Senate, and keep America changing.

This has everything to do with giving Democrats a boost, and if reps like Tlaib have to change the entire country around to do it, so be it.

These people really are out of control, aren’t they?

SHARE if you think Tlaib is WAY out of line for proposing a new American flag!