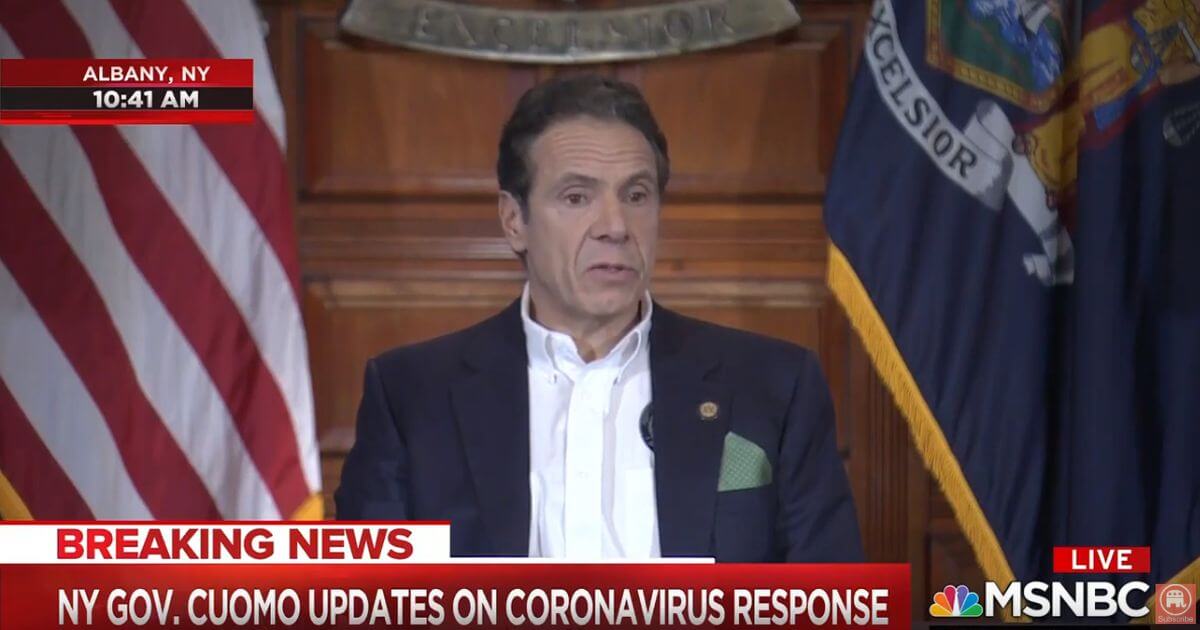 New York state is being slammed by coronavirus. The New York Times published the staggering statistics on Tuesday that reveal 25,665 infections and 210 deaths so far in the state.

While the Trump administration is directing resources to the state, New York Governor Andrew Cuomo is predictably using the crisis for his own political posturing by complaining about the state’s lack of ventilators.

The problem is, Cuomo didn’t prepare his state when he had the chance — but he’s blaming the Trump administration’s supposed lack of response.

To aid Cuomo and his constituents, the federal government is going to build four emergency hospitals, station one navy hospital ship offshore to help, and has already mobilized the National Guard and sent necessary equipment to the state, the New York Post confirmed Sunday.

Despite the Trump administration’s swift and thorough response, Cuomo complained in a news conference Tuesday about his state’s lack of ventilators, which are vital to patients with acute respiratory distress caused by coronavirus infection.

Cuomo decried the government’s reluctance to enact the federal Defense Production Act, which would compel companies to adapt their manufacturing processes to fit the government’s needs, in this case by producing ventilators.

Of course, that is unnecessary since companies such as Ford are already innovating ways to use their existing equipment and parts to manufacture ventilators and masks.

President Donald Trump reiterated on Tuesday that it simply is not necessary to use the power of the federal government to compel companies to do what they’re already doing.

“The Defense Production Act is in full force, but haven’t had to use it because no one has said NO!” Trump said on Twitter Tuesday. “Millions of masks coming as back up to States.”

The Defense Production Act is in full force, but haven’t had to use it because no one has said NO! Millions of masks coming as back up to States.

The dirty little secret is that Cuomo knows this, yet still complained that ventilators can’t be made fast enough to meet the coming need for his state for one important reason: it is his fault that the state has a shortfall in the first place.

Trump was eager to rebut Cuomo’s charge with the cold, hard facts about the governor’s failure to prepare when he had the chance.

The president explained during Fox News’ virtual town hall with Bill Hemmer that Cuomo “rejected buying recommended 16,000 ventilators in 2015 for [a] pandemic,” but “established death panels and lotteries instead.”

While Trump’s source for the number of ventilators is unclear, Fox News reported that in 2015, health officials in New York established a task force to look into the state’s lack of ventilators.

The task force discovered there were 8,991 ventilators in the state including a stockpile of 1,750, with most already in use, leaving just over 2,800 of them available. The report explained that in the case of a severe health pandemic, “many more patients will require the use of ventilators than can be accommodated with current supplies,” with a peak of over 18,600 potential ventilators needed in a case like the 1918 flu pandemic.

“If an influenza pandemic on the scale of the 1918 pandemic were to occur, it is possible that New York would face a significant shortage of ventilators,” the task force report continued. “Because influenza pandemics are unpredictable and their impact unknown in advance of the pandemic, officials must consider and plan for a worst-case scenario.”

Instead of buying additional ventilators with the potential to not have trained staff available to operate them, the report explained that keeping only a limited stockpile would balance the state’s need to prepare for a pandemic against its need “to maintain adequate funding for current and ongoing healthcare expenses.”

According to Fox News, instead of purchasing the additional ventilators, the task force created a system to determine who would be put on a ventilator based on priority.

Trump is not to be trifled with in matters regarding his team’s COVID-19 response, which the American people heartily support.

Cuomo is a coward who refuses to take responsibility, and since the governor failed to act in 2015, the people of New York are at greater risk.

Democratic politicians such as Cuomo love to empty the coffers for pet projects, but suddenly become penny pinchers when a useful expenditure comes their way. Now that his chance has come and gone, Cuomo has nothing left to do but point his finger at someone else.

UPDATE, March 25, 2020: This article has been updated to include additional information regarding the number of ventilators in the state of New York and warnings from health officials in 2015 about the lack of ventilators available in the case of a severe pandemic.